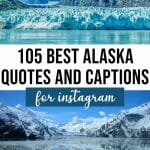 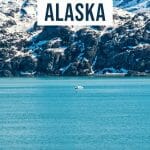 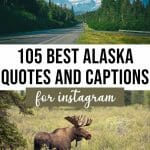 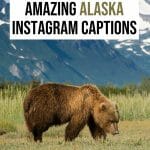 Whether you’re a seasoned traveler or just dreaming of your next vacation, you’ve probably seen some amazing photos of Alaska on Instagram.

The dramatic landscapes and pristine wilderness are definitely photo-worthy, but sometimes it can be hard to come up with the perfect caption. That’s where I come in – I’ve got a list of Alaska captions for Instagram that will go perfectly with your epic photos!

From famous quotes about Alaska to inspirational Alaska quotes and funny Alaska puns, here are the best Alaska captions for Instagram you can never go wrong with.

7. “For nature’s beauty and the bizarre!”

9. “Now we can see Russia from our front porch!”

10. “Get lost in the beauty of the Alaskan wilderness.”

11. “Come to Alaska and club a seal on your winter safari.”

12. “To the lover of wilderness, Alaska is one of the most wonderful countries in the world.”- John Muir

14. “This was one of the places people told me to go, it was one the big trips that you should see: Alaska.”- Jeff Goldblum

15. “The tall cityscape that was Anchorage encroached on the wide skies. It was like a giant walking and uninhabited, unclaimed land.”- Suzy Davies

16. “I went to Alaska a while back and surfed the waves generated from a glacier calving and ever since then, I’ve never been afraid in the ocean.”- Garrett McNamara

17. “Each evening the night swallowed the sun and gave the raven the sun’s energy. He stored this power in his wings, tinged with the blue of Alaskan skies.”- Suzy Davies

18. “For sheer majestic geography and sublime scale, nothing beats Alaska and the Yukon. For culture, Japan. And for all-around affection, Australia.”- Sam Abell

19. “I’ve been under the spell of the North ever since my childhood in Alaska. More and more, I’ve been returning to Alaska, and sometimes my adventures inspire a story.”- Will Hobbs

20. “John Muir, the famous naturalist, wrote in his journal that you should never go to Alaska as a young man because you’ll never be satisfied with any other place as long as you live. And there’s a lot of truth to that.”- Tom Bodett

21. “Despite everything, every piece of Alaska sang to me. I remembered every curve in the trails, every tree in the forest. It was familiar to me, comfortable. The more I thought about leaving it, the less I liked the idea. This was my home.”- Summer Lane

30. “Checking out the Last Frontier State.”

32. “Moose are the squirrels of Alaska.”- Tim Moon

33. “Alaska itself is an unusual state.”- Fareed Zakaria

34. “The Mountains are calling and I must go.”- John Muir

35. “Does my Alaska look fat in this map?”- Mame McCutchin

36. “Welcome to Alaska. Here’s a thousand dollars.”- The Simpsons

37. “Alaska was the cure to the disease of my despair.”- Summer Lane

38. “The original settlers of Alaska apparently were Russian.”- Jeff Goldblum

39. “What I miss most about living in Alaska is the fishing.”- Darby Stanchfield

40. “We have a great life here in Alaska, and we’re never going back to America again!”- Homer

41. “The light in Alaska, in particular, is so beautiful. So beautiful! Such incredible light.”- Sebastiao Salgado

49. “In Alaska they drink Mountain Dude.”

52. “If the Ninja Turtles moved to Alaska, they’d live in Seward.”

61. “Did Juneau that Alaska has its own capital?”

62. “Lots of women wish they could say Iditarod.”

64. “Most Alaskans don’t keep their money in greedy banks, they keep it in Fairbanks.”

65. “With the most powerful binoculars, I cannot see Alaska.”- Mikheil Saakashvili

66. “Historically, Alaska is a place that has attracted those fed up with conventionality.”- Bill O’Reilly

68. “You can’t just make yourself matter and then die, Alaska, because now I am irretrievably different.”- John Green

69. “Relegating grizzlies to Alaska is about like relegating happiness heaven; one may never get there.”- Aldo Leopold

70. “The Bermuda Triangle got tired of warm weather. It moved to Alaska. Now Santa Claus is missing.”- Steven Wright

71. “Unless we make Christmas an occasion to share our blessings, all the snow in Alaska won’t make it ‘white’.”- Bing Crosby

72. “Whenever I leave home to film, my wife Marina gets terrified that I’m going to come back having bought a tiny plot of land in rural Alaska.”- Ben Fogle

73. “I’m about to do my second Bikram yoga class in Anchorage, Alaska. It’s the only way to stay warm. I’ve got to get into shape. I’ve been eating nothing but fish and chips.”- Emily Blunt

74. “Alaska is what happens when Willy Wonka and the witch from Hansel and Gretel elope, buy a place together upstate, renounce their sweet teeth, and turn into health fanatics.”- Sloane Crosley

75. “It was a cold, bleak December morning in Alaska, a place so far north on planet Earth that if there were such things as popsicle people, they could live there quite comfortably.”- Dew Pellucid

76. “I’d read somewhere that nine out of ten adults in Alaska had a drinking problem. I could believe it. Snow, ice, sleet, wind, the dark night of the soul: what else were you supposed to do?”- T. C. Boyle

79. “It’s from an Aleut word, Alyeska. It means ‘that which the sea breaks against,’ and I love that.”- John Green

80. “Alaska’s forests are the most welcoming I know. There are no ticks, no snakes, no poison ivy in Alaska.”- Charles Kuralt

81. “I consider myself a product of Alaska. The love and the debt that I feel to my home state, you always want your hometown to be the proudest of you.”- Jewel

82. “Tom Kizzia hasn’t just observed and written about Alaska for three-plus decades, he’s lived it. Pilgrim’s Wilderness is a story that needed to be told by the only man who could tell it.”- Tom Bodett

83. “My mom, dad and me were a compact group. They instilled in me a love for the outdoors. On school breaks, we’d go fishing for a week in the wilds of Alaska or Canada. The land was always in their souls.”- John Carter Cash

84. “Kids in Alaska don’t know they’re growing up on the Last Frontier. It’s just what they see on the license plates, and it’s something tourists like to say a lot because they’ve never been around so many mountains and moose before.”- Tom Bodett

85. “Nobody is accidentally in Alaska. The people who are in Alaska are there because they choose to be, so they’ve sort of got a real frontier ethic. The people are incredibly friendly, interesting, smart people – but they also stay out of each other’s business.”- Marcus Sakey

86. “I’ve always been fascinated and stared at maps for hours as a kid. I’ve especially been most intrigued by the uninhabited or lonelier places on the planet. Like Greenland, for instance, or just recently flying over Alaska and a chain of icy, mountainous islands, uninhabited.”- Andrew Bird

87. “He should buy that dame a one-way ticket to Alaska.”- The Strip

88. “Relegating grizzlies to Alaska is about like relegating happiness to heaven; one may never get there.”- Aldo Leopold

90. “Yeah. If I were your age, startin’ fresh… Alaska. It’s the last frontier. Up there, you can be anything you want.”- El Camino

91. “I’ve always heard that heli-skiing in Alaska is amazing. I would love to be able to do that at some point in my life.”- Lindsey Vonn

92. “A changing environment will affect Alaska more than any other state, because of our location. I’m not one though who would attribute it to being man-made.”- Sarah Palin

93. “Two kinds of flocks come up to Alaska, Cora. People running to something and people running away from something. The second kind-you want to keep your eye out for them.”- Kristin Hannah

94. “I’m not someone who can lie on a beach and do nothing. I am not sure what you are supposed to do, so I get bored. I prefer to have a purpose, such as going to Alaska to see orca whales.”- Miranda Richardson

95. “Like any traveler, I’m always looking for those experiences that are almost unique to any place, and watching films around Alaska of the skies in winter made me want to taste those unworldly showers of light in person.”- Pico Iyer

97. “We grew up in Alaska and will rep The North Face all day long.”- John Gourley

98. “There is no middle ground, no safe place; not here, in the Great Alone.”- Kristin Hannah

100. “There are two kinds of people in Alaska: those who were born here and those who come here to escape something. I wasn’t born here.”- Rachel Clement

102. “Under the lake by Anvil Creek, a man has been frozen much like another man in the same wilderness had been frozen, in this area of Alaska where silence is the loudest sound.”- Lee Matthew Goldberg

103. “In terms of wilderness preservation, Alaska is the last frontier. This time, given one great final chance, let us strive to do it right. Not in our generation, nor ever again, will we have a land and wildlife opportunity approaching the scope and importance of this one.”- Mo Udall

104. “It’s not like Alaska isn’t wilderness – it mostly is. But most Alaskans don’t live in the wild. They live on the edge of the wild in towns with schools and cable TV and stores and dentists and roller rinks sometimes. It’s just like anyplace else, only with mountains and moose.”- Tom Bodett

105. “When I was 23, I climbed this mountain in Alaska called Devil’s Thumb alone. It was incredibly dangerous, and I did it because I thought that if I did something that hard and pulled it off, my life was gonna be transformed. And of course, nothing happened. But I get the search for purpose.”- Jon Krakauer

That’s a wrap! I hope you enjoyed reading these amazing Alaska quotes and that you had a great laugh at all the Alaska puns and funny Alaska Instagram captions. Do you know some other great Alaska captions for Instagram? Let me know in the comments!