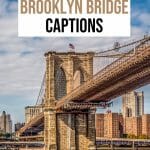 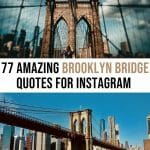 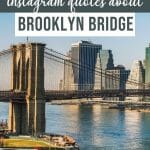 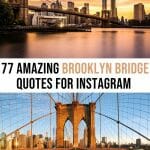 Looking for the best Brooklyn Bridge quotes for Instagram? You are in the right place!

Brooklyn Bridge is definitely one of the most iconic landmarks in New York City. On a par with the Golden Gate Bridge and London’s Tower Bridge, Brooklyn Bridge also ranks highly as one of the world’s most photogenic bridges.

Chances are if you’re visiting New York, you’ll end up with hundreds of photos of the Brooklyn Bridge. If you’re struggling to come up with the perfect Instagram caption for sharing your Brooklyn Bridge photos, this article is here to help you out!

Are you interested in reading about the best photo spots in New York City as well? Then make sure to check out my guide to the most Instagrammable places in NYC!

1. “Welcome to the Brooklyn Bridge.”

2. “Heaven is a place on the Brooklyn Bridge.”

4. “Down Under the Manhattan Bridge Overpass.”

6. “I could take photos of the Brooklyn bridge for hours! Such great.”

7. “Brooklyn Bridge is a great place to see a different part of the city.”

8. “Trying to be cute somewhere in between Brooklyn and Manhattan.”

10. “If you ever came to the Big Apple and never saw Brooklyn bridge you missed a huge part of this city.”

11. “The famous #Brooklynbridge in #NYC, Masterpiece of this city, Seen differently. Waking up early is always a big chance to be alone in all those very crowded places.”

12. “Sure, I know a place right across the Brooklyn Bridge where they’ll never find us.”– On the Town

13. “I would rather be the man who bought the Brooklyn Bridge than the man who sold it.”– Will Rogers

14. “I once started out to walk around the world but ended up in Brooklyn, that Bridge was too much for me.”– Lawrence Ferlinghetti

15. “You’ll miss her most when you roam, ’cause you’ll think of her and think of home, the good old Brooklyn Bridge.”– Frank Sinatra

16. “Spring and fall in New York are the best seasons here to get out and about. I like the little park in Dumbo between the Manhattan and Brooklyn bridge. I like Prospect Park.”– Paul Dano

17. “I have made all my films for my children with the exception of my first film because my oldest daughter wasn’t born when I was making the film about the Brooklyn Bridge”– Ken Burns

18. “I remember perfectly my first trip to New York, when I was on the bridge between Brooklyn and Manhattan, when I saw the skyscrapers. It was like an incredible dream.”– Diego Della Valle

19. “Everyone should walk across the Brooklyn Bridge. I did it three days in a row because it was one of the most exhilarating experiences I’ve ever had. The view is breathtaking.”– Seann William Scott

29. “Freezing temperatures in the Brooklyn bridge.”

30. “The Brooklyn Bridge and I grew up together.”– Al Smith

31. “Now I want to throw myself off the Brooklyn Bridge.”– Castle

33. “Scientists are people who build the Brooklyn Bridge and then buy it.”– William F. Buckley, Jr.

34. “How can you take a shortcut off the Brooklyn Bridge?”– The Super Mario Brothers Super Show

35. “Airbnb is a much more effective protest than shutting down the Brooklyn Bridge.”– Jason Calacanis

38. “Wire we going over the Brooklyn Bridge on foot?”

39. “The Brooklyn Bridge is all decked out at Christmas.”

40. “On the Brooklyn Bridge, you have to steel yourself.”

41. “The Brooklyn Bridge is no hidden gem. It’s pretty mainstream.”

42. “The Brooklyn Bridge really towers over other NYC landmarks.”

43. “People watching on the Brooklyn Bridge is a thrilling Livestream.”

44. “I was feeling stressed on the Brooklyn Bridge so I left to de-compress.”

45. “When crossing from Brooklyn to Manhattan, remember to say So Long Island.”

47. “Crossing the Brooklyn Bridge really takes a toll on you.”

48. “He dumped me on the Brooklyn Bridge. He said he couldn’t truss me.”

49. “The perfect outfit to wear on the Brooklyn Bridge? Well, it’s not a jumper!”

50. “Why did they store wine in the Brooklyn Bridge? They thought wine not?”

51. “You should take a belt on the Brooklyn Bridge because it already has suspenders.”

52. “Don’t surprise me on the Brooklyn Bridge. The suspension is giving me anxiety.”

53. “The Brooklyn Bridge was expensive to build. The city got nickel and limestoned.”

54. “I love just sitting and looking at the Brooklyn Bridge. It’s my favorite thing on cable.”

55. “It’s hard not to keep a good head on your shoulders when you’re on the Brooklyn Bridge. Whenever I’m there I feel so grounded.”

56. “For all the bridges joining Manhattan why in the world did you go and choose that’n.”– Darren Hanlon

57. “Tell you what, you think you can fly? Why don’t you jump off the Brooklyn Bridge, see what happens.”– Heroes

58. “You want the Brooklyn Bridge, all you gotta do is ask for it. If I can’t buy it, I’ll steal it.”– The Roaring Twenties

59. “Did you know that 35 people try to jump off the Brooklyn Bridge each year, mostly because of broken hearts?”– Abigail Breslin

60. “Well, it’s a fortunate thing you’re not a *crook!* You could sell the Brooklyn Bridge to the police department!”– The Fighting 69th

63. “I remember perfectly my first trip to New York when I was on the bridge between Brooklyn and Manhattan when I saw the buildings. It was like an incredible dream.”– Diego Delle Valle

64. “When Charles first saw our child Mary, he said all the proper things for a new father. He looked upon the poor little red thing and blurted, “She’s more beautiful than the Brooklyn Bridge.”– Helen Hayes

65. “It was reported this week that a man who was proposing to his girlfriend on the Brooklyn bridge dropped the ring, causing it to fall to the road below. The story has a happy ending though…the man didn’t have to get engaged.”– Seth Meyers

66. “I love to walk around New York. Honestly, that’s like the best thing, to walk over to Park Slope and go visit my friend Betty and take her dog out in the park or go walk across the Brooklyn Bridge. I really dig being outside and getting to see everybody in the street.”– Zoe Kazan

69. “Love is the bridge between two hearts.”

70. “We build too many walls and not enough bridges.”

71. “Love is the bridge between you and everything else.”

72. “I do not burn bridges. I just loosen the bolts a little bit each day.”

73. “A bridge can still be built, while the bitter waters are flowing beneath.”

74. “Don’t burn bridges. You’ll be surprised how many times you have to cross the same bridge.”

75. “Come, Let us build bridges of love with each other with the cement of kindness and pillars of trust.”

76. “I didn’t regret the bridges I’ve burned. I only regret that some people weren’t on the bridges when I burned them.”

77. “Crossing the bridge to get the other side. Cars, sound and craziness-it doesn’t matter what comes your way in life- we always make it to the other side.”

If you have any questions feel free to leave a comment below or send me an email, I always love helping you out! Do you know some other great quotes about Brooklyn Bridge? Let me know in the comments!