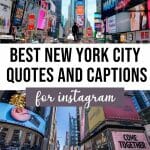 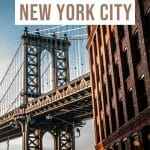 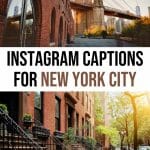 New York City is undoubtedly one of the most exciting dream destinations in the whole world. No wonder NYC inspired so many writers, actors, and other artists, you just simply can’t feel uninspired in New York! If you’re already visited the Big Apple, I’m sure you know what I’m talking about.

New York City is also one of the most photogenic places on the planet. Tall skyscrapers, insane viewpoints, beautiful parks, world-famous landmarks, what more can you ask for? It’s literally impossible to take a bad photo in New York.

If you already have tons of pictures from NYC but you still struggle with crafting the perfect caption for your New York picture on Instagram, you’ve come to the right place!

Are you interested in reading about the best photo spots in New York City as well? Then make sure to check out my guide to the most Instagrammable places in NYC!

5. “Anything is possible. This is New York.”

6. “London is a mystery, NYC is an explanation.”

8. “I want to live as many lives as there are in New York City.”

11. “The only people who can afford to be artists in New York are rich.”- Sophie Frances

12. “There is something in the New York air that makes sleep useless.”- Simone de Beauvoir

13. “There is more sophistication and less sense in New York than anywhere else on the globe.”- Elbert Hubbard

14. “A hundred times I have thought: New York is a catastrophe, and fifty times: it is a beautiful catastrophe.”- Le Corbusier

15. “I get out of the taxi and it’s probably the only city which in reality looks better than on the postcards: New York.”- Milos Forman

16. “New York is really the place to be; to go to New York, you’re going to the centre of the world, the lion’s den.”- Zubin Mehta

17. “More than anything else New York is a city of superlatives, a place where the best, the brightest, the biggest is the norm.”- Marilyn J. Appleberg

18. “London is satisfied, Paris is resigned, but New York is always hopeful. Always it believes that something good is about to come off, and it must hurry to meet it.”- Dorothy Parker

19. “The city seen from the Queensboro Bridge is always the city seen for the first time, in its first wild promise of all the mystery and the beauty in the world.”- F. Scott Fitzgerald

24. “Welcome to the concrete jungle.”

29. “If you follow your heart just right, it will get you to New York City.”

31. “Give me the streets of Manhattan!”- Walt Whitman

32. “You haven’t lived until you died in New York.”- Alexander Woollcott

33. “If London is a watercolor, New York is an oil painting.”- Peter Shaffer

37. “New York had all the iridescence of the beginning of the world.”- F. Scott Fitzgerald

38. “I love New York on summer afternoons when everyone’s away.”- F. Scott Fitzgerald

41. “When I’m in New York, I just want to walk down the street and feel this thing, like I’m in a movie.”- Ryan Adams

46. “Someone asked me for directions, so you can call me a real New Yorker.”

47. “A bad day in New York City is still better than a good day anywhere else.”

49. “New York is the only city in the world where you can get run down on the sidewalk by a pedestrian.”- Russell Baker

50. “When you leave New York, you are astonished at how clean the rest of the world is. Clean is not enough.”- Fran Lebowitz

51. “Anytime four New Yorkers get into a cab together without arguing, a bank robbery has just taken place.”- Johnny Carson

69. “The views from the Empire State Building couldn’t be any NYCer.”

70. “After sightseeing all day, I’m Central Park-ing myself down for the rest of the night.”

71. “Once you have lived in New York and made it your home, no place else is good enough.”- John Steinbeck

72. “The flag of New York City should be someone with four bags opening a door with their shoulder.”- Alex Baz

73. “One belongs to New York instantly, one belongs to it as much in five minutes as in five years.”- Tom Wolfe

74. “When I first moved to New York, I bought Vogue instead of dinner. I just felt it fed me more.”- Carrie Bradshaw

75. “The wanderer in Manhattan must go forth with a certain innocence, because New York is best seen with innocent eyes.”- Pete Hamill

76. “You can try to change New York, but it’s like Jay-Z says: Concrete bunghole where dreams are made up. There’s nothing you can do.”- Liz Lemon

77. “If you want to become a real New Yorker, there’s only one rule: You have to believe New York is, has been, and always will be the greatest city on earth. The center of the universe.”- Ellen R. Shapiro

78. “I would give the greatest sunset in the world for one sight of New York’s skyline.”- Ayn Rand

79. “It’s pretty cliched, but Times Square is just incredible. You really feel like you’re in the capital of the world.”- Timothy F. Cahill

80. “Whoever is born in New York is ill-equipped to deal with any other city: all other cities seem, at best, a mistake, and, at worst, a fraud. No other city is so spitefully incoherent.”- James Baldwin

81. “I look out the window and I see the lights and the skyline and the people on the street rushing around looking for action, love, and the world’s greatest chocolate chip cookie, and my heart does a little dance.”- Nora Ephron

83. “Even if it ain’t all it seems, I got a pocketful of dreams. Baby I’m from New York, concrete jungle where dreams are made of. There’s nothing you can’t do. Now you’re in New York. These streets will make you feel brand new. Big lights will inspire you. Hear it for New York, New York, New York.”- Alicia Keys

86. “If you follow your heart just right, it will get you to New York City.”- Unknown

87. “If Louis was right, and you only get one great love, New York may just be mine. And I can’t have nobody talking shit about my boyfriend.”- Carrie Bradshaw

88. “I love New York, even though it isn’t mine, the way something has to be, a tree or a street or a house, something, anyway, that belongs to me because I belong to it.”- Truman Capote

89. “Quite simply, I was in love with New York. I do not mean ‘love’ in any colloquial way, I mean that I was in love with the city, the way you love the first person who ever touches you and you never love anyone quite that way again.”- Joan Didio

93. “Concrete jungle where dreams are made of, there’s nothing you can’t do, now you’re in New York!”- Alicia Keys and JAY-Z, ‘Empire State of Mind’

94. “Look around, look around at how lucky we are to be alive right now! History is happening in Manhattan and we just happen to be in the greatest city in the world!”- Hamilton Cast, ‘The Schuyler Sisters’

95. “Curtains forcing their will against the wind, children sleep, exchanging dreams with seraphim. The city drags itself awake on subway straps; and I, an alarm, awake as a rumor of war, lie stretching into dawn, unasked and unheeded.”- Maya Angelou, “Awaking in New York”

That’s a wrap! I hope you enjoyed reading these beautiful and inspirational New York captions and you had a great laugh at all the New York puns and funny quotes about New York. Crafting the perfect Instagram caption for your NYC photo doesn’t seem so hard anymore, right?

If you have any questions feel free to leave a comment below or send me an email, I always love helping you out! Do you know some other great New York captions for Instagram? Let me know in the comments!

CHECK ALL MY NYC ARTICLES HERE

Pin it for later!