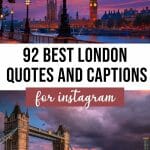 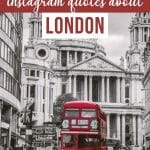 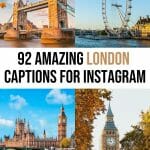 So you’ve just been to London, you have a ton of photos to share but you just don’t know what to write? Don’t worry, I got you covered!

4. “To walk alone in London is the greatest rest.”

6. “All you need is love and a vacation in London.”

7. “A bad day in London is better than a good day anywhere else.”

9. “By seeing London, I have seen as much of life as the world can show.”

10. “Money can’t buy you happiness, but it can buy you a ticket to London.”

12. “I travel continuously, and I see many cities, but there is nowhere like London.” – Norman Foster

13. “The English language is like London: proudly barbaric yet deeply civilised, too, common yet royal, vulgar yet processional, sacred yet profane.” – Stephen Fry

14. “It is difficult to speak adequately or justly of London. It is not a pleasant place; it is not agreeable, or cheerful, or easy, or exempt from reproach. It is only magnificent.” – Henry James

15. “When exploring London, you will come across lots of excitement by change, so try to take everything in rather than just rushing around to all of the major tourist haunts.” – Richard Branson

16. “It is not the walls that make the city, but the people who live within them. The walls of London may be battered, but the spirit of the Londoner stands resolute and undismayed.” – George VI

17. “One of the the things I most liked about the city – apart from all its obvious attractions, the theatre, the galleries, the exhilarating walks by the river – was that so few people ever asked you personal questions.” – Julia Gregson

18. “London always reminds me of a brain. It is similarly convoluted and circuitous. A lot of cities, especially American ones like New York and Chicago, are laid out in straight lines. Like the circuits on computer chips, there are a lot of right angles in cities like this. But London is a glorious mess.” – James Geary

26. “I like the spirit of this great London, which I feel all around me.”

27. “In London, everyone is different, and that means everyone can fit in.”

28. “London is sexy because it’s full of eccentrics.” – Rachel Weisz

29. “If you’re curious, London is an amazing place.” – David Bailey

30. “New York has a great energy, but London is better.” – Jaime Winstone

31. “I like the spirit of this great London which I feel around me.” – Charlotte Brontë

32. “In London, everyone is different, and that means anyone can fit in.” – Paddington Bear

33. “I’ve been walking about London for the last 30 years, and I find something fresh in it every day.” – Walter Besant

34. “I went to London because, for me, it was the home of literature. I went there because of Dickens and Shakespeare.” – Ben Okri

41. “If you need me, you’ll find me in Borough Market stuffing my face with delicious food. PS: don’t need me.”

42. “Nothing in London is certain but expense.” – William Shenstone

43. “In London, love and scandal are considered the best sweeteners of tea.” – John Osborne

45. “A person who is tired of London is not necessarily tired of life; it might be that he just can’t find a parking place.” – Paul Theroux

46. “Oh, I love London Society! It is entirely composed now of beautiful idiots and brilliant lunatics. Just what Society should be.” – Oscar Wilde

47. “There are two places in the world where men can most effectively disappear — the city of London and the South Seas.” – Herman Melville

58. “The traffic in London is like a Piccadilly Circus.”

59. “Visiting Buckingham Palace, but I’m having a bad heir day.”

60. “Watching the River Thames is one of the world’s most famous live streams.”

68. “About to enjoy the showers of London”

72. “Trying to make our way around London, but we don’t have the foggiest idea where we are.”

74. “The streets of London have their map, but our passions are uncharted. What are you going to meet if you turn this corner?” – Virginia Woolf

75. “Aesthetically, London is just beautiful; it’s a gorgeous city. The architecture, monuments, the parks, the small streets – it’s an incredible place to be.” – Sara Bareilles

76. “London opens to you like a novel itself… it is divided into chapters, the chapters into scenes, the scenes into sentences: it opens to you like  series of rooms, doors and passages. Mayfair to Piccadilly to Soho to the Strand.” – Anna Quindlen

77. “One of the things I most liked about the city – apart from all its obvious attractions, the theatre, the galleries, the exhilarating walks by the river – was that so few people ever asked you personal questions.” – Julia Gregson

78. “The best bribe which London offers to-day to the imagination, is, that, in such a vast variety of people and conditions, one can believe there is room for persons of romantic character to exist, and that the poet, the mystic, and the hero may hope to confront their counterparts.” – Ralph Waldo Emerson

82. “Searching for ravens at the Tower of London.”

83. “There’s nowhere else like London. Not at all, anywhere.”

84. “In London, love and scandals are considered the best tea sweeteners.”

86. “One thing about London is that when you step out into the night, it swallows you.”

87. “The vibe of London as a city is captivating. It’s both fast-paced and extremely rushed but still has the calmness that would attract any big-city person.” – Ali Fazal

88. “London’s greatest strength is our diversity, and it’s wonderful to see Londoners celebrating our capital’s different traditions, determined to stand up to division.” – Sadiq Khan

89. “You find no man, at all intellectual, who is willing to leave London. No, Sir, when a man is tired of London, he is tired of life; for there is in London all that life can afford.” – Samuel Johnson

90. “London goes beyond any boundary or convention. It contains every wish or word ever spoken, every action or gesture ever made, every harsh or noble statement ever expressed. It is illimitable. It is Infinite London.” – Peter Ackroyd

91. “In this city 300 languages are spoken and the people that speak them live side by side in harmony. This city typifies what I believe is the future of the human race and a future where we grow together and we share and we learn from each other.” – Ken Livingstone

92. “My Dad says that being a Londoner has nothing to do with where you’re born. He says that there are people who get off a jumbo jet at Heathrow, go through immigration waving any kind of passport, hop on the tube and by the time the train’s pulled into Piccadilly Circus they’ve become a Londoner.” – Ben Aaronovitch

That’s a wrap! I hope you enjoyed reading these amazing and inspirational London captions for Instagram and you had a great laugh on all the London puns and funny quotes about London. Crafting the perfect instagram caption for your London photo doesn’t seem so hard anymore, right?

If you have any questions feel free to leave a comment below or send me an email, I always love helping you out! Do you know some other great London captions for Instagram? Let me know in the comments!