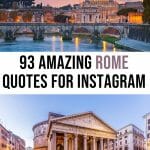 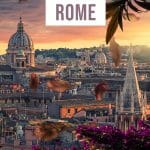 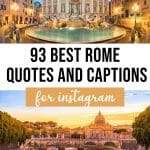 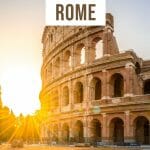 Rome is one of the most popular travel bucket list destinations, for a good reason! Home to the famous Colosseum and Trevi Fountain, the Italian capital is just simply stunning and it’s definitely not to be missed when planning a trip to Italy.

If you’re looking for some inspiration for visiting Rome or you’ve already been there and have a ton of photos to share, you are in the right place! In this post, I collected all the best Rome quotes for Instagram, including meaningful Rome quotes, hilarious Rome puns, funny quotes about Rome, and many more.

If you’re still in the planning phase and you want to know more about where to find the best photography spots in Rome, make sure to check out my in-depth guide about the best Rome Instagram spots!

6. “Life’s short. Get the double scoop of gelato.”

8. “If you love me, you’d take a selfie with me in front of the Colosseum.”

9. “Rome is built on ruins and is quite breathtaking, what makes you think you can’t be too?”

13. “If we could be reborn wherever we chose, how crowded Rome would be.” – Francine Prose

15. “You look at passers-by in Rome and think, ‘Do they know what they have here?’ ” – Frank McCourt

16. “Rome has grown since its humble beginnings that it is now overwhelmed by its own greatness.” – Livy

17. “Rome is possibly my favourite city in the world. I have such fond memories there – most of them food-related.” – Mallory Jansen

22. “Came to Rome for the sights, stayed for the gelato.”

27. “Rome was a poem pressed into service as a city.” – Anotole Broyard

29. “All things atrocious and shameless flock from all parts to Rome.” – Tacitus

30. “They say Rome wasn’t built in a day, but I wasn’t on that particular job.” – Brian Clough

31. “Rome holds my psyche in balance. Whenever I’m there, it’s like a holiday.” – Giambattista Valli

Quotes About the Uniqueness of Rome

32. “Rome is not like any other city. It’s a big museum, a living room that shall be crossed on one’s toes.” – Alberto Sordi

33. “I love Rome and the way that you can wander around and find something interesting around every street corner. You can smell the history.” – Jonathan Agnew

34. “Rome is a little bit different. There is something in Rome, incredible, like in a Fellini movie. Everybody’s screaming and laughing very loud.” – Alessandro Michele

35. “In Rome, I particularly love the history, churches, sculptures, and architecture and the fact that you can walk along a tiny cobbled street and turn the corner to find the Trevi Fountain.” – Philip Treacy

36. “From the dome of St. Peter’s one can see every notable object in Rome… He can see a panorama that is varied, extensive, beautiful to the eye, and more illustrious in history than any other in Europe.” – Mark Twain

37. “The thing I love about Rome is that it has so many layers. In it, you can follow anything that interests you: town planning, architecture, churches, or culture. It’s a city rich in antiquity and early Christian treasures, and just endlessly fascinating. There’s nowhere else like it.” – Claire Tomalin

39. ”Rome is not like any other city. It’s a majestic museum, a living room to tiptoe through.” – Alberto Sordi

40. ”Rome has not seen a modern building in more than half a century. It is a city frozen in time.” – Richard Meier

42. ”Ancient Rome was as confident of the immutability of its world and the continual expansion and improvement of the human lot as we are today.” – Arthur Erickson

43. “Rome is one enormous mausoleum. There, the past lies visibly stretched upon his bier. There is no today or tomorrow in Rome; it is perpetual yesterday.” – Saint Venerable Bede

44. “All roads indeed lead to Rome, but theirs also is a more mystical destination, some bourne of which no traveler knows the name, some city, they all seem to hint, even more eternal.” – Richard Le Gallienne

46. “Found a Roman romance while roaming in Rome.”

49. “Raiding Rome was fun – glad Caesar moved his legions before my vacation!”

50. “A fool is one who admires other cities without visiting Rome.” – Francesco Petrarca

51. “All the bad things that have ever happened to me have always happened in Rome.” – Richard Burton

52. “Ancient Rome declined because it had a Senate, now what’s going to happen to us with both a House and a Senate?” – Will Rogers

53. “The beauty of Rome is that you can wander into a pizzeria just about anywhere and get a real Italian pizza that’s thankfully worlds away from the Super Supreme I used to order at Pizza Hut as a kid.” – Ed Stoppard

60. “My favorite Roman food is Trastavere.”

61. “I chianti-ven believe how beautiful Rome is!”

63. “Maybe we should ask him to join us? He looks cannelloni.”

69. “My favorite movie is Sistine candles.”

74. “It’s impossible to ruin the view of the Colisseum.”

75. “Leave some Rome in your suitcase for souvenirs!”

76. “There are many marbleous statues in Rome, but so many people take them for granite.”

77. “Rome, the city where memories were chiselled in marble.” – Elif Shafak

78. “I think there are two cities in the world – New York and Rome.” – Frank McCourt

79. “I sometimes fancy that Rome will crowd everything else out of my heart.” – Nathaniel Hawthorne

80. “I thought I knew everything when I came to Rome, but I soon found I had everything to learn.” – Edmonia Lewis

81. “The fall of Rome seemed unthinkable to people at the time but inevitable to historians reflecting upon it with the benefit of context.” – Mary Pilon

82. “Yes, I have finally arrived to this Capital of the World! I now see all the dreams of my youth coming to life… Only in Rome is it possible to understand Rome.” – Johann Wolfgang von Goethe

83. “Rome – the city of visible history, where the past of a whole hemisphere seemoving in funeral procession with strange ancestral images and trophies gathered from afar.” – George Eliot

84. “I like things that are kind of eclectic when one thing doesn’t go with another. That’s why I love Rome. The town itself is that way. It’s where Fascist architecture meets classic Renaissance, where the ancient bangs up against the contemporary. It has a touch of everything.” – Giambattista Valli

86. “Methinks I will not die quite happy without having seen something of that Rome.” – Sir Walter Scott

87. “Rome is a place almost worn out by being looked at, a city collapsing under the weight of reference.” – Graham Joyce

88. “I am a sucker for those old traditional places, and Rome is as good as it gets, particularly when you throw in Italian food.” – Roger Federer

89. “Going around Rome, you can find beauty because, quite simply, Rome is very beautiful. But the beauty of the people is sometimes harder to discover.” – Paolo Sorrentino

90. “Each, in its own way, was unforgettable. It would be difficult to – Rome! By all means, Rome. I will cherish my visit here in memory as long as I live.” – Audrey Hepburn

91. “There’s one thing that I like about Rome that was stated by Napoleon: that from sublime to pathetic is only one step away. And in Rome there’s a constant shifting between sublime and pathetic.” – Paolo Sorrentino

92. “Rome is a city wherein every corner you have a reminder of the sacred world. That’s why I have sacred music, minimalist sacred music, which is also music I like because, at the end of the day, that’s what I want to do.” – Paolo Sorrentino

93. “In ‘Roma,’ I wanted to get across the idea that underneath Rome today is ancient Rome. So close. I am always conscious of that, and it thrills me. Imagine being in a traffic jam at the Coliseum! Rome is the most wonderful movie set in the world… As was the case with many of my film ideas, it was inspired by a dream.” – Federico Fellini

That’s a wrap! I hope you enjoyed reading these amazing and inspirational Rome quotes and you had a great laugh at all the Rome puns and funny quotes about Rome. Crafting the perfect Instagram caption for your Rome photo doesn’t seem so hard anymore, right?

If you have any questions feel free to leave a comment below or send me an email, I always love helping you out! Do you know some other great Rome quotes for Instagram? Let me know in the comments!

CHECK ALL MY Rome ARTICLES HERE

Planning a trip to Rome? Check out these awesome books and travel guides for more inspiration!