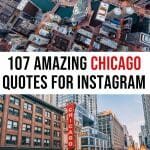 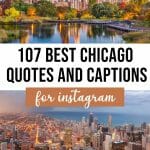 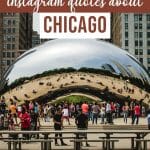 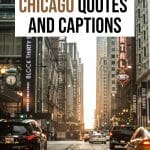 Whether you’ve just been to Chicago and you have a ton of photos to share or you’re just looking for inspiration for visiting the Windy City – you came to the right place!

If you’re still in the planning phase and you want to know more about where to find the best photography spots in Chicago, make sure to check out my in-depth guide about the most Instagrammable places in Chicago!

2. “Either you love Chicago or you are wrong.”

3. “You never forget your first day in Chicago.”

5. “Hello Chicago, your lights are fireflies in my heart.”

6. “You can leave Chicago, but it will never leave you.”

7. “Somewhere over the rainbow, you will find Chicago.”

8. “Once upon a time, in the enchanted land of Chicago.”

9. “Follow your heart, even if it takes you all the way to Chicago.”

10. “I adore Chicago. It is the pulse of America.” – Sarah Bernhardt

11. “Going to Chicago was like going out of the world.” – Muddy Waters

12. “I must confess a shameful secret: I love Chicago best in the cold.” – Erik Larson

13. “It’s 106 miles to Chicago, we’ve got a full tank of gas, half a pack of cigarettes; it’s dark and we’re wearing sunglasses.” – Elwood Blues

14. “I love Chicago; it is unique in the world. So much intellect, so many artistic voices – it has fantastic potential (as an Olympic candidate).” – Jerome Sans

15. “It is the most perfect presentation of nineteenth-century individualistic industrialism I have ever seen. Chicago is one hoarse cry for discipline.” – H. G. Wells

16. “I am an organic Chicagoan. Living there has given me a multiplicity of characters to aspire for. I hope to live there the rest of my days.” – Gwendolyn Brooks

31. “Chicago is an October sort of city even in spring.” – Nelson Algren

32. “Theater in Chicago will always be my first love.” – William Petersen

33. “Chicago seems a big city instead of merely a large place.” – A.J. Liebling

35. “A facade of buildings facing a lake and behind the facade, every type of dubiousness.” – E.M. Forster

36. “Eventually, I think Chicago will be the most beautiful great city left in the world.” – Frank Lloyd Wright

37. “Hell has been described as a pocket edition of Chicago.” – Ashley Montagu

38. “I miss everything about Chicago, except January and February.” – Gary Cole

39. “Loving Chicago is like loving a woman with a broken nose.” – Nelson Algren

40. “There is only one thing for Chicago to do, and that’s to move to a better neighborhood.” – Herman Fetzer

41. “In Chicago not only your vote counts, but all kinds of other votes-kids, dead folks, and so on.” – Dick Gregory

42. “You’d never think of taking a cab if you had to walk a mile down Chicago’s Michigan Avenue.” – Helmut Jahn

43. “I think that’s how Chicago got started. A bunch of people in New York said, ‘Gee, I’m enjoying the crime and poverty, but it just isn’t cold enough. Let’s go west.” – Richard Jeni

46. “My first day in Chicago, September 4, 1983. I set foot in this city and just walking down the street, it was like roots, like the motherland. I knew I belonged here.” – Oprah Winfrey

47. “Chicago is constantly auditioning for the world, determined that one day, on the streets of Barcelona, in Berlin’s cabarets, in the coffee shops of Istanbul, people will know and love us in our multidimensional glory, dream of us the way they dream of San Francisco and New York.” – Mary Schmich

48. “Out in Chicago, the only genuinely civilized city in the New World, they take the fine arts seriously and get into such frets and excitements about them as are raised nowhere else save by baseball, political treachery, foreign wars, and romantic loves . . . almost one fancies the world bumped by a flying asteroid, and the Chicago River suddenly turned into the Seine.” – Henry Mencken

49. “Chicago is a city where the practical and the inspirational exist in harmony; where visionaries who made no small plans rebuilt after a great fire and taught the world to reach new heights. It’s a bustling metropolis with the warmth of a small town; where the world already comes together every day to live and work and reach for a dream—a dream that no matter who we are, where we come from; no matter what we look like or what hand life has dealt us; with hard work, and discipline, and dedication, we can make it if we try.” – Barack Obama

51. “Perhaps the most typically American place in America.” – James Bryce

52. “You know what they say about Chicago. If you don’t like the weather, wait fifteen minutes.” – Ralph Kiner

53. “The best food is in Chicago. There are great restaurants everywhere, from fancy places to burger joints.” – Steve Carell

55. “I warn you, Jedediah, you’re not gonna like it in Chicago. The wind comes howling in off the lake and gosh only knows if they ever heard of lobster Newburg.” – Orson Welles

56. “Chicago is a city of contradictions, of private visions haphazardly overlaid and linked together. If the city was unhappy with itself yesterday-and invariably it was-it will reinvent itself today.” – Pat Colander

63. “A trip to Chicago is an L-evated experience.”

65. “Make sure to relish the good times in Chicago.”

66. “Dogs love Chicago because they get to visit Wiggly Field.”

67. “You’d have to be a weir-mixture not to like Chicago Deep Dish.”

74. “You haven’t bean to Chicago unless you’ve bean here.”

75. “Welcome to Chicago. This town stinks like a whorehouse at low tide.” – The Untouchables

76. “Six bucks and my right nut says we’re not landing in Chicago.” – Planes, Trains and Automobiles

77. “It’s a very bad sign when a cop thinks that Chicago will fall apart without him.” – Running Scared

79. “It’s 106 miles to Chicago, we got a full tank of gas, half a pack of cigarettes, it’s dark… and we’re wearing sunglasses.” – The Blue Brothers

80. “Eliot Ness: I want to get Capone! I don’t know how to do it. – Jim Malone: You wanna know how to get Capone? They pull a knife, you pull a gun. He sends one of yours to the hospital, you send one of his to the morgue. That’s the Chicago way! And that’s how you get Capone!” – The Untouchables

81. “I’m going to do all my movies here in Chicago. The Tribune referred to me as a ‘former Chicagoan’. As if, to do anything, I have to leave Chicago. I never left. I worked until I was 29 at the Leo Burnett advertising agency, and then I quit to do this. This is a working city, where people go to their jobs and raise their kids and live their lives.” – John Hughes

83. “My client feels that it was a combination of liquor and jazz that led to the downfall.”

84. “You wanted advice? Well here it is, straight from me to you, keep your paws off my underwear.”

85. “You’re a phony celebrity and in two weeks no one’s going to give a sh.t about you… that’s Chicago.”

86. “I’m gonna be a celebrity, that means somebody everyone knows. They’re gonna recognize my eyes, my hair, my teeth, my boobs, my nose.”

89. “- Roxie Hart: You’re, the Velma Kelly. I was there the night you got arrested.
– Velma Kelly: Yeah? You and half of Chicago.”

91. “Chicago does not go to the world, the world comes to Chicago!” – Peter Orner

92. “I’d rather be a lamppost in Chicago than a millionaire in any other city.” – William A. Hulbert

93. “I’m impressed with the people from Chicago. Hollywood is hype. New York is talk. Chicago is work.” – Michael Douglas

94. “I just wanted to see every single musical I could. The very first one I saw was ‘Beauty and the Beast’, the only one I could get a ticket for, and then ‘Les Miserables’ and then ‘Chicago’.” – America Ferrera

95. “Chicago is not the most corrupt of cities. The state of New Jersey has a couple. Need we mention Nevada? Chicago, though, is the Big Daddy. Not more corrupt, just more theatrical, more colorful in its shadiness.” – Studs Terkel

96. “Chicago is a town, a city that doesn’t even have to measure itself against any other city. Other places have to measure themselves against it. It’s big, it’s outgoing, it’s tough, it’s opinionated, and everybody’s got a story.” – Anthony Bourdain

97. “It is hopeless for the occasional visitor to try to keep up with Chicago—she outgrows his prophecies faster than he can make them. She is always a novelty; for she is never the Chicago you saw when you passed through the last time.” – Mark Twain

98. “There seems to be a different Chicago around every street corner, behind every bar, and within every apartment, two-flat, cottage, or bungalow. City of immigrants or city of heartless plutocrats, say what you will, Chicago almost defies interpretation. In many ways, Chicago is like a snake that sheds its skin every thirty years or so and puts on a new coat to conform to a new reality.” – Dominic A. Pacyga

100. “A facade of skyscrapers facing a lake and behind the facade, every type of dubiousness.” – E.M. Forster

101. “Sometimes words are just music themselves. Like ‘Chicago’ is a very musical sounding name.” – Tom Waits

102. “Anywhere in the world, you hear a Chicago bluesman play, it’s a Chicago sound born and bred.” – Ralph Metcalfe

103. “It’s one of the greatest cities on the planet. My heart beats differently when I’m in Chicago. It slows down and I feel more at ease.” – Jeremy Piven

105. “I give you Chicago. It is not London and Harvard. It is not Paris and buttermilk. It is American in every chitling and sparerib. It is alive from snout to tail.” – H. L. Mencken

106. “A lot of real Chicago lives in the neighborhood taverns. It is the mixed German and Irish and Polish gift to the city, a bit of the old country grafted into a strong new plant in the new.” – Bill Granger

107. “Chicago still remains a Mecca of the Midwest—people from both coasts are kind of amazed how good life is in Chicago, and what a good culture we’ve got. You can have a pretty wonderful artistic life and never leave Chicago.” – Harold Ramis

That’s a wrap! I hope you enjoyed reading these amazing and inspirational Chicago captions for Instagram and you had a great laugh at all the Chicago puns and funny quotes about Chicago. Crafting the perfect Instagram caption for your Chicago photo doesn’t seem so hard anymore, right?

If you have any questions feel free to leave a comment below or send me an email, I always love helping you out! Do you know some other great Chicago captions for Instagram? Let me know in the comments!

CHECK ALL MY Chicago ARTICLES HERE