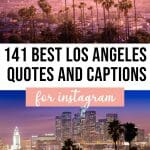 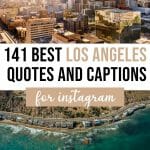 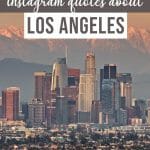 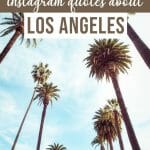 So you’ve just been to the City of Angels, you have a ton of photos to share but you just don’t know what to write? Don’t worry, I got you covered!

Are you interested in reading about the best photo spots in Los Angeles as well? Then make sure to check out my guide to the most Instagrammable places in LA!

6. “They write songs about California girls for a reason.”

7. “A bad day in LA is better than a good day anywhere else.”

8. “Must be winter in California – there are a few clouds in the sky.”

9. “You can’t buy happiness, but you can buy a trip to Los Angeles.”

13. “In Los Angeles, you can have the city life and feel like you’re on holiday at the same time” – Isabel Marant

14. “In Los Angeles, people dress with the deep and earnest hope that people will do nothing but stare at them.” – Ellie Kemper

15. “Also, because Los Angeles was designed for cars, everything you want to do and everything you care about is too far away to get to on foot, so you never walk to anything.” – Amy Wilentz

18. “People cut themselves off from their ties of the old life when they come to Los Angeles. They are looking for a place where they can be free, where they can do things they couldn’t do anywhere else.” – Tom Bradley

19. “Los Angeles has no seasons, so it’s kind of hard to keep track of time here. The lines between spring, summer, fall, and winter all blur like my vision. I get stuck on repeat for different measures of eternity.” – Kris Kudd

25. “Sunsets are better in Los Angeles.”

26. “Feeling so starstruck everywhere I go.”

28. “In Los Angeles, everyone is a star.” – Denzel Washington

29. “Los Angeles is a constellation of plastic.” – Norman Mailer

31. “I love Los Angeles. It reinvents itself every 2 days.” – Billy Connolly

34. “Los Angeles is like a a beauty parlor at the end of the universe.” – Emily Mortimer

36. “We are all citizens of Los Angeles because we have seen so many movies.” – D.J. Waldie

41. “Los Angeles is a very transient town. It’s the only place I know where you can actually rent a dog.” – Rita Rudner

42. “Fall is my favorite season in Los Angeles, watching the birds change color and fall from the trees.” – David Letterman

44. “In slow-paced Los Angeles, it’s easy to get distracted by a good sunset or a flock of butterflies and forget to produce any work at all.” – Molly Lambert

45. “There are two modes of transport in Los Angeles: car and ambulance. Visitors who wish to remain inconspicuous are advised to choose the latter.” – Fran Lebowitz

48. “Los Angeles weather is the weather of catastrophe, of apocalypse.” – Joan Didion

49. “You can’t find any true closeness in Hollywood, because everybody does the fake closeness so well.” – Carrie Fisher

50. “In Los Angeles, your eye keeps reaching for an end point and never finds it, because it doesn’t exist.” – Susan Orlean

51. “Los Angeles…I mean, who would want to live in a place where the only cultural advantage is that you can turn right on a red light?” – Woody Allen

52. “The city has a reputation for constant sunshine and warmth, but once the sun is down at night, LA remembers it’s secretly a desert under its newer identity. The cool night air doesn’t care what midday was like.” – Amy Spalding

53. “There’s always – somehow a red carpet everywhere. And I think that, you know, it’s a fantasyland out here, you know. It’s beautiful. It’s sunny all the time. You know, there are beautiful people everywhere because you’re not allowed to cross the Los Angeles city lines unless you’re beautiful or skinny.” – Debra Messing

59. “Under the boardwalk, we’ll be havin’ some fun.” – The Drifters, “Under the Boardwalk”

61. “Climb up the H of the Hollywood sign, yeah
In these stolen moments
The world is mine” – Lana Del Rey & The Weeknd, “Lust For Life”

63. “Los Angeles was built as a machine of transformation.” – Dan Johnson

65. “Los Angeles: a city with all the personality of a paper cup.” – Raymond Chandler

66. “Marriages that last are with people who do not live in Los Angeles.” – Farrah Fawcett

67. “If you spend any time in Los Angeles, there’s only one topic of conversation.” – Alan Rickman

68. “Anyone living in Los Angeles who has opposable thumbs is required to write a screenplay.” – James Scott Bell

69. “I would fly to Los Angeles just for a cheeseburger with pickles and extra tomatoes from In-N-Out.” – Zoe Kravitz

74. “Where do LA ghosts go on Halloween? MaliBOO!”

77. “Why did the fish come to Hollywood? He wanted to be a starfish.”

78. “What does Los Angeles have in common with the Hobbit? – Smaug.”

79. “How do you reply to an email about someone freaking out at the Los Angeles International Airport? – Re:LAX”

85. “I think Beverly Hills looks pretty good on me.”

86. “When in doubt, go shopping in Beverly Hills.”

89. “Follow your heart, even if it takes you all the way to Beverly Hills.”

90. “In Beverly Hills, they don’t throw garbage away. They make it into television shows.”

94. “Sending my selfie to Hollywood, because I’m a star.”

96. “People just assume that if you’re famous, you’re in Hollywood.”

97. “Climb up the H of the Hollywood sign, in these stolen moments the world is mine.” – Lana del Rey

108. “First rule of Venice Beach: do whatever floats your boat.”

119. “Everything moves a little quicker in Los Angeles.” – Kyle Chandler

120. “Tip the world over on its side and everything loose will land in Los Angeles.” – Frank Lloyd Wright

121. “I love Los Angeles. I love Hollywood. They’re beautiful. Everybody’s plastic, but I love plastic. I want to be plastic.” – Andy Warhol

122. “So I live in Los Angeles, and it’s kind of a goofy place. They have an airport named after John Wayne. That ought to explain it. It has a charming kind of superstitious innocence.” – George Carlin

124. “I could hear everything, together with the hum of my hotel neon. I never felt sadder in my life. LA is the loneliest and most brutal of American cities; New York gets godawful cold in the winter but there’s a feeling of wacky comradeship somewhere in some streets. LA is a jungle.” – Jack Kerouac

125. “One good thing about New York is that most people function daily while in a low-grade depression. It’s not like if you’re in Los Angeles, where everyone’s so actively working on cheerfulness and mental and physical health that if they sense you’re down, they shun you. Also, all that sunshine is a cruel joke when you’re depressed. In New York, even in your misery, you feel like you belong.” – Mindy Kaling

128. “I do love America. And LA is a very short commute to America it’s like half an hour on the plane.” – Craig Ferguson

129. “L.A. can be a place of torment because the rewards are so huge, but the difficulties of getting your hands on those rewards is so great.” – Geoff Dyer

130. “The ideas you have about cities that you’ve always known don’t work in L.A., and once you toss those aside you’ll be much better off.” – Eve Babitz

131. “Los Angeles gives one the feeling of the future more strongly than any city I know of. A bad future, too, like something out of Fritz Lang’s feeble imagination.” – Henry Miller

132. “Los Angeles was the kind of place where everybody was from somewhere else and nobody really dropped anchor. It was a transient place. People drawn by the dream, people running from the nightmare. Twelve million people and all of them ready to make a break for it if necessary. Figuratively, literally, metaphorically — any way you want to look at it — everybody in L.A. keeps a bag packed. Just in case.” – Michael Connelly

135. “Los Angeles is in love with its limitless horizontality, as New York may be with its verticality.” – Jean Baudrillard

138. “Many of my friends back in New York and elsewhere have a glib or dismissive attitude toward Los Angeles. It’s a place of strip malls and traffic and not much else, in their opinion.” – Moby

139.. “People don’t seem to have a problem with a romanticized New York, in fact that’s almost all they ever do, in some sense, is romanticize that place. Los Angeles deserves the same courtesy.” – Matthew Specktor

140.. “LA is the loneliest and most brutal of American cities; New York gets godawful cold in the winter but there’s a feeling of wacky comradeship somewhere in some streets. LA is a jungle.” – Jack Kerouac

141. “I don’t like Los Angeles. The people are awful and terribly shallow, and everybody wants to be famous but nobody wants to play the game. I’m from New York. I will do whatever to get what I need.” – Lady Gaga

That’s a wrap! I hope you enjoyed reading these amazing and inspirational Los Angeles captions for Instagram and you had a great laugh at all the Los Angeles puns and funny quotes about Los Angeles. Crafting the perfect Instagram caption for your LA photo doesn’t seem so hard anymore, right?

If you have any questions feel free to leave a comment below or send me an email, I always love helping you out! Do you know some other great Los Angeles captions for Instagram? Let me know in the comments!