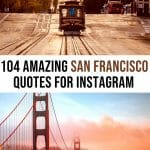 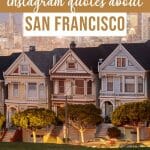 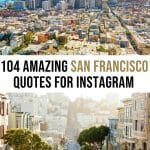 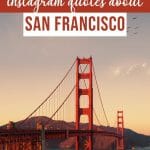 So you’ve just been to San Francisco, you have a ton of photos to share on Instagram but you just don’t know what to write? Don’t worry, I got you covered!

Are you interested in reading about the best photo spots in San Francisco as well? Then make sure to check out my guide to the best San Francisco Instagram spots too!

2. “Chillin’ in the San Francisco hills.”

4. “Dear San Francisco, I will never get over you.”

5. “I can finally tick San Francisco off my bucket list.”

7. “You can leave San Francisco, but it will never leave you.”

9. “Follow your heart, even if it takes you all the way to San Francisco.”

11. “San Francisco has only one drawback – ’tis hard to leave.” – Rudyard Kipling

12. “There may not be a Heaven, but there is a San Francisco.” – Ashleigh Brilliant

13. “It is an odd thing, but everyone who disappears is said to be seen in San Francisco.” – Oscar Wilde

14. “San Francisco is a mad city – inhabited for the most part by perfectly insane people.” – Rudyard Kipling

15. “San Francisco itself is art… every block is a short story, every hill a novel, every home a poem.” – William Saroyan

16. “Leaving San Francisco is like saying goodbye to an old sweetheart. You want to linger as long as possible.” – Walter Cronkite

17. “If you’re alive, you can’t be bored in San Francisco. If you’re not alive, San Francisco will bring you to life.” – William Saroyan

18. “But oh, San Francisco! It is and has everything – you wouldn’t think that such a place as San Francisco could exist.” – Dylan Thomas

19. “It is a good thing the early settlers landed on the east coast… if they’d landed in San Francisco, the rest of the country would still be uninhabited.” – Herbert Mye

29. “Nothing comes close to the Golden Coast.”

33. “San Francisco is the friendliest city in the world.” – Joe DiMaggio

34. “I prefer a wet San Francisco to a dry Manhattan.” – Larry Geraldi

35. “Every window in Alcatraz has a view of San Francisco.” – Susanna Kaysen

36. “If you’re not alive, San Francisco will bring you to life.” – William Saroyan

38. “San Francisco is perhaps the most European of all American cities.” – Cecil Beaton

45. “Every man should be allowed to love two cities, his own and San Francisco.” – Gene Fowler

46. “Anyone who doesn’t have a great time in San Francisco is pretty much dead to me.” – Anthony Bourdain

47. “California, more than any other part of the Union, is a country by itself, and San Francisco a capital.” – James Bryce

48. “I don’t think San Francisco needs defending. I never meet anyone who doesn’t love the place, Americans or others.” – Doris Lessing

50. “Like it’s namesake, San Francisco opens its arms to all sentient beings. The emotionally and spiritually wounded, in particular, have always come here looking for freedom and change, for a place to grow and be themselves.” – Jim Crotty

51. “I moved to San Francisco because the masquerade of kindly gestures is, at least, kind. And it remains kind. And all the people who would sit back and comment on the garishness of the costumes, the hollowness of the dialogue, the lack of divine conviction, well, all those people are either gone or fifteen years old.” – Jay Caspian King

56. “Nothing can gold a candle to this bridge.”

59. “It’s hard to fog-get your first time in San Francisco.”

61. “I’m going to Haight it when I have to leave San Francisco.”

63. “I’m going to Embarcadero on a Mission to explore San Francisco.”

64. “The coldest winter I ever spent was a summer in San Francisco.” – Mark Twain

65. “Isn’t it nice that people who prefer Los Angeles to San Francisco live there?” – Herb Caen

67. “Los Angeles? That’s just a big parking lot where you buy a hamburger for the trip to San Francisco.” – John Lennon

68. “You can go one block to the next in San Francisco and get a completely different opinion of what the issue is.” – Don Johnson

69. “America only has three cities: New York, San Francisco, and New Orleans. Everything else is Cleveland.” – Tennessee Williams

70. “You are fortunate to live here. If I were your President, I would levy a tax on you for living in San Francisco.” – Mikhail Gorbachev

72. “San Francisco is a golden handcuff with the key thrown away.” – John Steinbeck

73. “I can walk down the streets of San Francisco, and here I’m normal.” – Robin Williams

74. “I have always been rather better treated in San Francisco than I actually deserved.” – Mark Twain

75. “I’m just mad for San Francisco. It’s like London and Paris stacked on top of each other.” – Twiggy

76. “I love this city. If I am elected, I’ll move the White House to San Francisco. Everybody’s so friendly.” – Robert Kennedy

77. “I never dreamed I’d like any city as well as London. San Francisco is exciting, moody, exhilarating. I even love the muted fogs.” – Julie Christie

78. “The geniality of San Francisco’s economic, intellectual and political climate makes it the most varied and challenging city in the United States.” – James Michener

79. “San Francisco put on a show for me. I saw her across the bay, from the great road that bypasses Sausalito and enters the Golden Gate Bridge. The afternoon sun painted her white and gold—rising on her hills like a noble city in a happy dream. A city on hills has it over flat-land places. New York makes its own hills with craning buildings, but this gold and white acropolis rising wave on wave against the blue of the Pacific sky was a stunning thing, a painted thing like a picture of a medieval Italian city which can never have existed.” – John Steinbeck

80. “San Francisco is a city where people are never more abroad than when they are at home.” – Benjamin F. Taylor

81. “I think the beauty of San Francisco is that you can skip without really freaking anybody out.” – Chris Reifsteck

82. “San Francisco is where you come when you want to see people looking like who they truly are.” – Mark Childress

83. “If free speech and individuality are American characteristics, there is no place more American than San Francisco.” – Desi del Valle

84. “San Francisco is the only city I can think of that can survive all the things you people are doing to it and still look beautiful.” – Frank Lloyd Wright

85. “What fetched me instantly (and thousands of other newcomers with me) was the subtle but unmistakable sense of escape from the United States.” – H.L. Mencken

86. “Chicago is the great American city, New York is one of the capitals of the world, and Los Angeles is a constellation of plastic; San Francisco is a lady.” – Norman Mailer

87. “Somehow the great cities of America have taken their places in a mythology that shapes their destiny: money lives in New York. Power sits in Washington. Freedom sips cappuccino in a sidewalk cafe in San Francisco.” – Joe Flower

88. “San Francisco is a complex town that lets you be yourself, that accepts you even if your family doesn’t. No matter how uncomfortable your own skin feels, you can move to this city, discover who you really are, and plant your feet on the ground.” – Jack Boulware

89. “A city is where you can sign a petition, boo the chief justice, fish off a pier, gape at a hippopotamus, buy a flower at the corner, or get a good hamburger or a bad girl at 4 a.m. A city is where sirens make white streaks of sound in the sky and foghorns speak dark grays — San Francisco is such a city.” – Herb Caen

90. “Either you love San Francisco or you are wrong.”

91. “Falling in love with San Francisco, one cable car at a time.”

92. “San Francisco is the city that other cities can only dream of being.”

93. “If you’re going to San Francisco, be sure to wear some flowers in your hair.”

94. “When you get tired of walking around in San Francisco, you can always lean against it.”

95. “San Francisco is poetry. Even the hills rhyme.” – Pat Montandon

96. “San Franciscans are very proud of their city, and they should be.  It’s the most beautiful place in the world.” – Robert Redford

97. “San Francisco beats the world for novelties, but the inventive faculties of her people are exercised on a specialty. Controversy is our forte.” – San Francisco Call

98. “A traveler paying his first visit, San Francisco has the interest of a new planet. It ignores the meteorological laws which govern the rest of the world.” – Fitz Hugh Ludlow

99. “San Francisco itself is art, above all literary art. Every block is a short story, every hill a novel. Every home a poem, every dweller within immortal. That is the whole truth.” – William Saroyan

100. “Every morning in San Francisco was a bit like waking up on the edge of the earth: beautiful and damp and wild, full of the strange music people make, open-armed, into the wind.” – Elizabeth Percer

101. “Perpetual spring, the flare of adventure in the blood, the impulse of men who packed Virgil with their bean-bags on the overland journey, conspired to make San Francisco a city of artists.” – William Henry Irwin

102. “Like its namesake, San Francisco opens its arms to all sentient beings. The emotionally and spiritually wounded, in particular, have always come here looking for freedom and change, for a place to grow and be themselves.” – Jim Crotty

103. “A bend reveals a sudden vision of San Francisco in shades of blue, a city in a dream, and I was filled with a tremendous yearning to live in that place of blue hills and blue buildings, though I do live there, I had just left there after breakfast.” – Rebecca Solnit

104. “Suddenly we reached a height and saw stretched out ahead of us the fabulous white city of San Francisco on her eleven mystic hills with the blue Pacific and its advancing wall of potato-patch fog beyond, and smoke and goldenness in the late afternoon of time.” – Jack Kerouac

That’s a wrap! I hope you enjoyed reading these amazing and inspirational San Francisco captions for Instagram and you had a great laugh on all the San Francisco puns and funny quotes about San Francisco. Crafting the perfect Instagram caption for your San Francisco photo doesn’t seem so hard anymore, right?

If you have any questions feel free to leave a comment below or send me an email, I always love helping you out! Do you know some other great San Francisco captions for Instagram? Let me know in the comments!