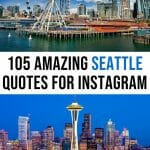 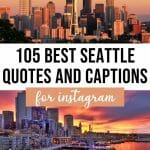 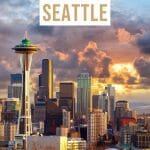 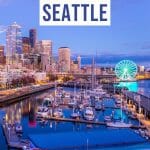 Looking for the best Seattle captions for Instagram? You are in the right place!

Mostly known as the birthplace of Starbucks and its overall coffee culture, Seattle is definitely one of the best places to visit in the United States for culture lovers, art buffs, and foodies. Whether you’ve already been to Seattle and have tons of photos to share or you’re just looking for inspiration for your first visit, I got you covered!

In this post, I collected all the best Seattle captions for Instagram, including short quotes about Seattle, famous Seattle quotes, funny Seattle Instagram captions, hilarious Seattle puns, and many more. Let’s get into it!

4. “It rains nine months a year in Seattle.”

6. “The Pacific Northwest is for the coffee junkies.”

8. “You’re not awake in Seattle if you hadn’t had your coffee.”

9. “Follow your heart, even if it takes you all the way to Seattle.”

10. “Seattle is not an overly friendly city. It is a civil city, but not altogether friendly. People from outside mistake the civility for friendliness.”

11. “Your friends in Seattle are downright Canadian in their niceness. None of you has a cell phone. The girls wear hoodies and big cotton underpants and walk around with tangled hair and smiling, adorned backpacks.”

12. “Seattle is for people who love culture, but refuse to sacrifice their wild nature to attain it.”- Kimberly Kinrade

13. “In Seattle, you haven’t had enough coffee until you can thread a sewing machine while it’s running.”- Jeff Bezos

14. “Seattle is full of people who have their own lives to live. They won’t waste their time being friendly. But they are civil.”- Jonathan Raban

15. “To some extent, Seattle remains a frontier metropolis, a place where people can experiment with their lives, and change and grow and make things happen.”- Tom Robbins

16. “I really enjoy doing theater, but doing theater in Seattle is like dropping a brick in a bottomless well. It’s gratifying, but it’s almost like doing radio. It’s ephemeral.”- Dan Savage

17. “Seattle has unleashed this weird phenomenon on the world called the coffee shop. And the coffee shop, thanks to Starbucks, is the place where socially isolated, lonely, needy people gather together to ignore one another.”- Mark Driscoll

18. “At night, what you see is a city, because all you see is lights. By day, it doesn’t look like a city at all. The trees outnumber the houses. And that’s completely typical of Seattle. You can’t quite tell: is it a city, is it a suburb, is the forest growing back?”- Jonathan Raban

19. “In Seattle, we live among the trees and the waterways, and we feel we are rocked gently in the cradle of life. Our winters are not cold and our summers are not hot and we congratulate ourselves for choosing such a spectacular place to rest our heads.”- Garth Stein

20. “The sky in Seattle is so low, it felt like God had lowered a silk parachute over us. Every feeling I ever knew was up in that sky. Twinkling joyous sunlight; airy, giggle cloud wisps; blinding columns of sun. Orbs of gold, pink, flesh, utterly cheesy in their luminosity.”- Maria Semple

21. “Seattle is beautiful. You look at the sky and it’s one of the most beautiful skies in the world, and then there’s the Puget Sound, which will hurt you, if you fall into it, but it’s also beautiful. Seattle is a city of contradictions. Within the same city, there’s darkness and light.”- Veena Sud

22. “Seattle, the mild green queen: wet and willing, cedar-scented, and crowned with slough grass, her toadstool scepter tilted toward Asia, her face turned ever upward in the rain; the sovereign who washes her hands more persistently than the most fastidious proctologist.”- Tom Robbins

37. “The bluest skies you’ve ever seen in Seattle.”- Perry Como

38. “I love Seattle. I couldn’t be anywhere else.”- Lauren Jackson

39. “I have a fond place in my heart for Seattle.”- Magic Johnson

41. “It’s hard not to fall in love with Seattle on a beautiful summer’s day.”- Robert Spector

43. “Unfortunately Seattle is my muse, for the better or worse of Seattle – I’m not sure.”- Maria Semple

44. “We all came to Seattle in hopes of building better lives. No one said we wouldn’t have to struggle first.”- Regina Scott

45. “Earth does not belong to us; we belong to the earth. Take only memories, leave nothing but footprints.”- Chief Seattle

46. “Seattle is like a global gumbo, a melting pot with all kinds of people the rich, the poor, white people, some Chinese, Filipino, Jewish and black people they’re all here.”- Quincy Jones

47. “Seattle was built out on pilings over the sea, and at high tide the whole city seemed to come afloat like a ship lifting free from a mud berth and swaying in its chains.”- Jonathan Raban

48. “My wife and I just prefer Seattle. It’s a beautiful city. Great setting. You open your front door in the morning and the air smells like pine and the sea, as opposed to bus exhaust.”- Ron Reagan

49. “Hovering over me was the Chihuly chandelier. Chihulys are the pigeons of Seattle. They’re everywhere and even if they don’t get in your way, you can’t help but build up a kind of antipathy toward them.”- Maria Semple

50. “I miss Seattle a lot. It was my first city that I lived in on my own. It was a great city to play for… in the back of my mind, I still have a thing for Seattle and always am going to remember what they’ve done for me.”- Kevin Durant

51. “And it’d be very hard to make up something as strange as the Dutch tulipmania in the seventeenth century, for example. Or the mysterious case of Thomas Clapper. Or the entire civic history of Seattle, Washington.”- Stephen Briggs

52. “When I grew up in Seattle, by the way, in the 70’s, it was a fishing village. There were loggers and fishers and my dad had a sewer company and it wasn’t the way Seattle is now. Culturally, it was very different back then.”- Rainn Wilson

53. “All those ninnies have it wrong. The best thing about Seattle is the weather. The world over, people have ocean views. But across our ocean is Bainbridge Island, an evergreen curb, and over it the exploding, craggy, snow Olympics. I guess what I’m saying: I miss it, the mountains and the water.”- Maria Semple

54. “It’s like a hypnotist put everyone from Seattle into a collective trance. ‘You are getting sleepy, when you wake up you will want to live only in a Craftsman house, the year won’t matter to you, all that will matter is that the walls will be thick, the windows tiny, the rooms dark, the ceilings low, and it will be poorly situated on the lot.”- Maria Semple

60. “You bring the sunshine to Seattle.”

65. “You always said Seattle was beautiful, now I Bellevue.”

72. “Got over my fear of needles by visiting Seattle.”

86. “Don’t Seattle for anything less than perfect.”

88. “Summer in Seattle allows me to indulge in some of the region’s top culinary delights.”- Tom Douglas

89. “All I really had was a suitcase and my drums. So I took them up to Seattle and hoped it would work.”- Dave Grohl

90. “She was back in western Washington state, where rain was so prevalent that a day of sunshine was the lead story on the local news.”- Susan Mallery

91. “Everyone in Seattle is a total pussy when it comes to snow. The whole city shut down, the place looked like an apocalyptic movie.”- Hamilton Leithauser

92. “I’ve been through WTO riots in Seattle, massive earthquakes, major floods… forest fires. I just try to be as even-keeled and calm as possible.”- Gary Locke

93. “Simply as a writer of books, I’m thrilled and proud that Seattle should have raised, on a public vote, sufficient money to build a central library, and moreover to rebuild every other library in the city: 28 of them.”- Jonathan Raban

94. “In Seattle, I soon found that my radical ideas and aesthetic explorations, ideas and explorations that in Richmond, Virginia, might have gotten me stoned to death with hush puppies, were not only accepted but occasionally applauded.”- Tom Robbins

95. “I think it’s evident that expensive neighborhoods in Seattle are surrounded by natural beauty. That elevates city life. So if we can make cities more attractive in the long run, we can be smarter about issues like development, zoning, and economics.”- Stone Gossard

96. “He was actually quite fond of Seattle’s weather, and not merely because of its ambivalence. He liked its subtle, muted qualities and the landscape that those qualities encouraged if not engendered: vistas that seemed to have been sketched with a sumi brush dipped in quicksilver and green tea. It was fresh, it was clean, it was gently primal, and mystically suggestive.”- Tom Robbins

97. “On the mainland, a rain was falling. The famous Seattle rain. The thin, gray rain that toadstools love. The persistent rain that knows every hidden entrance into collar and shopping bag. The quiet rain that can rust a tin roof without the tin roof making a sound in protest. The shamanic rain that feeds the imagination. The rain that seems actually a secret language, whispering, like the ecstasy of primitives, of the essence of things.”- Tom Robbins

100. “Like a summer night in Seattle
When you kiss me under the moonlight.
Let the raindrops fall all around us,
As I sail in the wake of your love.”- Jenna Drey

101. “Hello Seattle, I am a cold seahorse
Feeling warm in your sand
I sing about the tide and the ocean surf
Rolling in the evening breeze.”- Owl City, ‘Hello Seattle’

103. “See them running heading
Homeward to Seattle
Deem
All the liars in your tribe.”- Marcy Playground, ‘The shadow of Seattle’

104. “In her false witness
Hope you’re still with us
To see if they float or drown
Our favorite patient.”- Nirvana, ‘Frances Farmer Will Have Her Revenge On Seattle’

105. “The bluest skies you’ve ever seen in Seattle
And the hills the greenest green in Seattle
Like a beautiful child growing up free and wild
Full of hopes and full of fears
Full of laughter full of tears
Full of dreams to last the years in Seattle”- Perry Como, ‘Seattle’

That’s a wrap! I hope you enjoyed reading these inspirational Seattle quotes and you had a great laugh at all the Seattle puns and funny quotes about Seattle.

If you have any questions feel free to leave a comment below or send me an email, I always love helping you out! Do you know some other great Seattle captions for Instagram? Let me know in the comments!