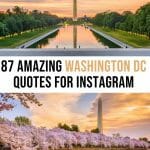 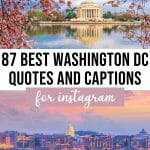 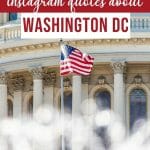 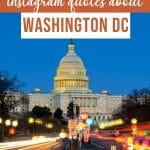 Washington DC is one of the most photogenic cities in the world, and with so many amazing places to explore, it’s no wonder that so many Instagrammers love to visit!

Whether you’re snapping a picture of the White House or of yourself exploring one of the city’s beautiful parks, these captions will help you capture all the magic of Washington DC. Let’s get into it!

3. “Following the blossoms in Washington DC.”

7. “Washington is a city of Southern efficiency and Northern charm.”

8. “Washington D.C is a city filled with people who think they’re important.”

9. “Two minutes in Washington DC and I’m already convinced I should run for president.”

10. “Even though it’s almost completely white, this place inspires the red-white-and-blue.”

11. “When somebody comes along and says, ‘I think Washington DC sucks’ that is not wrong.”- Van Jones

12. “It is true that when you are in the White House alone, it is a lonely place. Big and lonely.”- Nancy Reagan

13. “The White House is the people’s house. When you do historical restoration, that must be what it is.”- Iris Apfel

14. “Any man who does not like dogs and want them about does not deserve to be in the White House.”- Calvin Coolidge

15. “It is true what is said in Washington – ‘No matter how cynical you get, it is never enough to catch up’.”- Louie Eohmert

16. “Common looking people are the best in the world. That is the reason the Lord makes so many of them.”- Abraham Lincoln

17. “I was raised in Washington, DC in a household where one parent was a Republican and the other was a Democrat, so I got both sides.”- Sandra Bullock

18. “Hardly anybody tells the truth these days. For the truth I have to go to Washington DC, and whatever a politician says, interpolate the opposite.”- Jarod Kintz

19. “There is as much chance of repealing the Eighteenth Amendment as there is for a hummingbird to fly to the planet Mars with Washington Monument tied to its tail.”- Morris Sheppard

20. “Whenever you are faced with an explanation of what’s going on in Washington, the choice between incompetence and conspiracy, always choose incompetence.”- Charles Krauthammer

21. “Well Washington DC what are you going to do. They think the capitol steps are the state of the art in comedy. You try to drag them into the 20th century let alone the 21st and they refuse to come with you.”- Harry Shearer

35. “Every man’s happiness is his own responsibility.”- Abraham Lincoln

36. “The White House is the finest prison in the world.”- Harry S. Truman

37. “Never stop believing that fighting for what’s right is worth it.”- Hillary Clinton

40. “Washington is no place for a good actor. The competition from a bad actors is too great.”- Fred Allen

41. “In Washington, DC, politics dominate even the most casual conversations.”- Armstrong Williams

42. “Outside of the ki*lings, Washington has one of the lowest crime rates in the country.”- Marion Barry

47. “Filling my camera roll with pictures of Washington D.C.”

50. “If you want to fall in love with Washington, you just have to come here once.”

51. “Washington monuments might not look strong, but it can make a strong statement.”

57. “Stronger together in Washington DC.”

58. “Legends are born in Washington DC.”

64. “Washington, DC is to lying what Wisconsin is to cheese.”

65. “What seafood is popular in Washington D.C.? Lobbysters.”

67. “Everything in this city is a clue according to National Treasure.”

68. “So when Putin goes out to buy a Coke, thirty seconds later it is known in Washington DC.”

69. “The most terrifying words in the English language are: I’m from the government and I’m here to help.”

71. “Has anyone else ever noticed that the Washington Monument looks absolutely nothing like George Washington?”

72. “Such a weird feeling, knowing that the President is probably somewhere in there, walking around in his bathrobe.”

78. “I’ll be long gone before some smart person ever figures out what happened inside this Oval Office.”- George W. Bush

79. “If gun control bore any relation to homicide rates, Washington DC would be the safest place in the country.”- Mark Steyn

81. “Washington is a bubble, and there is nothing more powerful than the conservative grassroots when we are engaged and letting our voice be heard.”- Ted Cruz

82. “Make sure of two things: Be careful – microphones are always hot, and understand that in Washington DC, a gaffe is when you tell the truth. So, be careful!”- Joe Biden

83. “I happen temporarily to occupy this big White House. I amúgy living witness that any one of your children may look to come here as my father’s child has.”- Abraham Lincoln

84. “The White House is not the place to learn how to deal with international crisis, the balance of power, war and peace, and the economic future of the next generation.”- Joe Biden

85. “In New York, people are unhappy on purpose, because unhappiness makes them seem more complex. In Washington DC it just sort of works out that way.”- Chuck Klosterman

86. “I think this is the most extraordinary collection of talent, of human knowledge, that has ever been gathered together at the White House – with the possible exception of when Thomas Jefferson dined alone.”- John F. Kennedy

If you have any questions feel free to leave a comment below or send me an email, I always love helping you out! Do you know some other great Washington DC captions for Instagram? Let me know in the comments!